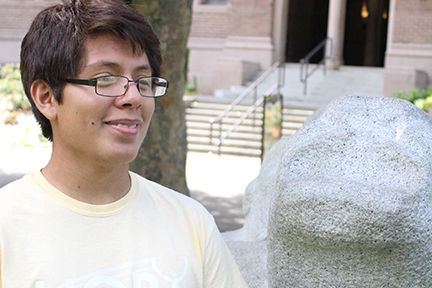 Hands made for helping

After Joel returned from Natural Helpers Camp, he decided to relax in his living room. While laying on the couch, he received a phone call from a classmate in need.

A bit offset, Joel answered the phone call. The boy talked about his problems, and Joel was even more offset when he realized the severity of this boy’s problems were. Joel talked with the boy for a quite a while, explaining that everyone is the way they are and he shouldn’t be ashamed to be himself. Joel went on to say that the boy should embrace who he is and be himself instead of what others want him to be. Joel even recalls quoting Dr. Seuss, “there is nothing that is truer than true, that really only you can be you as you.”

While Joel was at Natural Helpers Camp, he had learned a skill known to the Natural Helpers Club as the Helping Skill. This skill is a step by step procedure that shows you how to help a person get through whatever they are experiencing. “By using the helping skill I was able to help them get through some of the depression that they were going through,” Joel said.

Joel Aleman is a junior at Delta High School, and puts others before himself. Joel considers one of his greatest accomplishments to be his acceptance into the Delta High School because the school has pushed him into leaving his comfort zone by having him do things like joining clubs and being more social.

During his sophomore year Joel “had the honor of joining Natural Helpers,” and has enjoyed having the ability to help his classmates with problems they are experiencing. “They have really pushed me to try and play a bigger part in our community and because of that I have grown and gotten to know a lot of the upperclassmen,” Joel said.

He has been given a lot of responsibility in clubs he participates in. Joel feels that a main struggle he deals with is getting overwhelmed.

And remember the boy with the low self esteem? He still goes to Delta and has been doing much better. Joel is good friends with this boy and has noticed a change since their talk. The unnamed boy has more friends and is more positive  and outgoing than he was.